Experience of Participating in the 124th Canton Fair 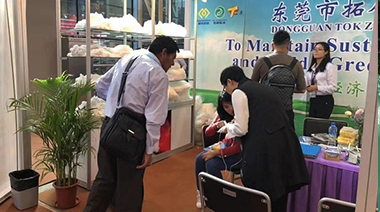 The 124th China Import and Export Commodity Fair (Canton Fair) closed on the afternoon of November 4. This Canton Fair was held against the background of Sino-US trade war and the fluctuation of RMB exchange rate. Faced with internal and external pressures, this Canton Fair closely revolves around the policy of "striving for steady progress and innovative development". Our company has completed the exhibition with the most positive attitude, received every customer who came to our booth, fully demonstrated our new and old products and company culture, and contributed to the further development of our company's foreign trade.

In 2017, 63.71% of the total number of participants from the top ten trading partner countries and regions attended the conference. The buyers and purchasers of the countries and regions along the "one belt and one road" came to 84578, accounting for 44.56%, an increase of 0.16% over the same period last year.

There were 49,863 old purchasers who attended the meeting more than 10 times, which was basically the same as the previous year.

Our company has received more than 100 business cards at this exhibition. The number of visiting customers is less than the previous one, but the quality of customers is higher. Businessmen mainly distribute in South America, Middle East, Eastern Europe, North Africa, Southeast Asia and other regions.

During the Canton Fair, one customer has reached the intention of cooperation, and several other interested customers are following up. I believe that through follow-up, more customers will establish cooperative relations with our company.

Generally speaking, the results of this Canton Fair are satisfactory, and we will strive for more results after the fair.